Simple tastes yet a curious palette. Fond of familiar comfort food yet experimental with myriad cuisines. Happily digg in to something alien and innovative but satiated only with those last bites of conventional native usual viand. Sounds primitive? 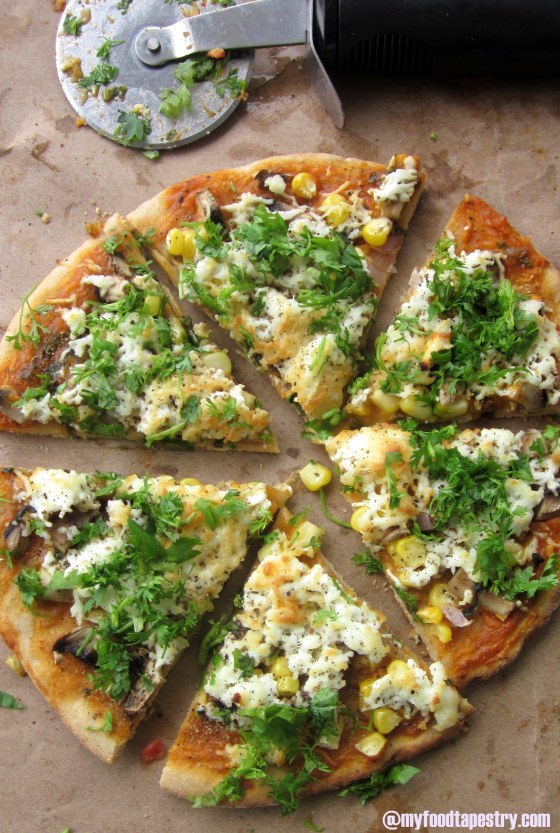 I married a simple man. He likes dal rice and will be happy if a papad is added. The same guy never shies away trying something new and bold. He is experimental but his taste buds are immensely hard to please. If he doesn’t like something he will not mince his words to say so. He eats without creating a fuss partly because it is already made and he hates to waste food and partly because he loves me 😉 but later declares full throttle, that he will not eat that particular thing again.

He prefers familiar food. Something he has grown up with. Well, his case is not as severe as a friend of ours who even after having a full blown chinese meal wouldn’t be satisfied unless he had a small bowl of curd rice. 🙂

Just 2 posts back, I tried my hand at this wonderful 100% whole wheat pizza dough, which was a fabulous sunday lunch for all of us at home. A simple margherita with astounding results.

Happily gobbled in no time, husband craved for something closer to home…No basil-shasil, lots of garden fresh veggies and a whole lot of coriander/cilantro leaves to garnish. The guy is in love with coriander leaves from time immemorial. He likes it in everything (except desserts). Daal, sabzis, soup/stew, pav bhaji, bread, rice or in parathas!

He told me to hide the basil, and get the coriander leaves out. Along came the corn paneer and mushrooms with a wee bit of tandoori masala to tantalize his austere palette.

In a pan, heat oil. Saute onions. Once pinkish, add corn and chopped mushrooms along with a little bit of tandoori masala and salt. Takes hardly 3-4 minutes. Keep aside.

Roll out your dough into desired thickness on a pre oiled parchment paper. Spread the pizza sauce or ketch up on it. Spread the corn mushroom mix on it evenly. Top with grated paneer and little bit of cheese. 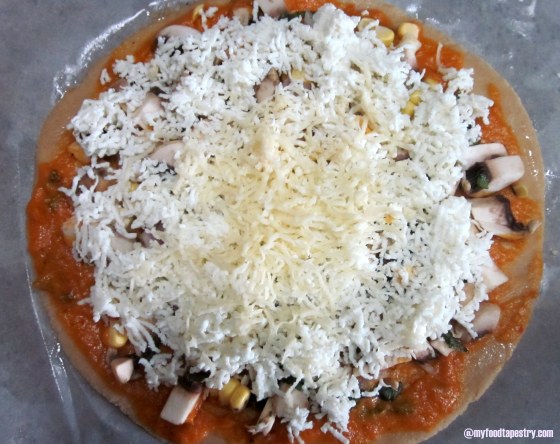 Ready for the oven

Bake at 200 degree celsius till the base slightly browns. Don’t wait for the paneer to brown, it won’t.
Once out of the oven. Sprinkle seasoning and chopped coriander leaves. Let is sit for 2-3 minutes – hardest to do. Then… Attack!

Right out of the oven

So, I chopped. He topped. We baked and then we devoured with such frenzy right on the kitchen top, that Milee definitely puts a check on the crazy parents box. The delightful bites with very Indian flavors won me over so much that I had to put this recipe up for you guys to try.

Milee did not care much for this mix mash of punjabi-italian slice. She was well fed with her simple margherita. But her amused, curious and ‘u guys are mad o wot’ look did seal the deal for a perfect end to a Sunday Brunch.