The web’s inundated with such recipes. Recipes of luscious no bake cakes and pies. But just a deluge of formulas is never enough to do certain things. I could have made this oh-so-simple sweet something long long back.. but I didn’t. What was I waiting for? Christmas you would say, but a decadent strawberry cake took its rightful place and again this particular recipe took a backseat.

One for the season

Inspiration. Yes, that’s what I needed. And Inspiration comes to us slowly and quietly… prime it with a little solitude
Being all alone(and the fact that a box full of cherries is lying uneaten)has its impacts. Yes, you end up making a cheery cherry chocolate pie. And if the inspiration bit is kicking your butt, then you end up adding nutella to it 😉 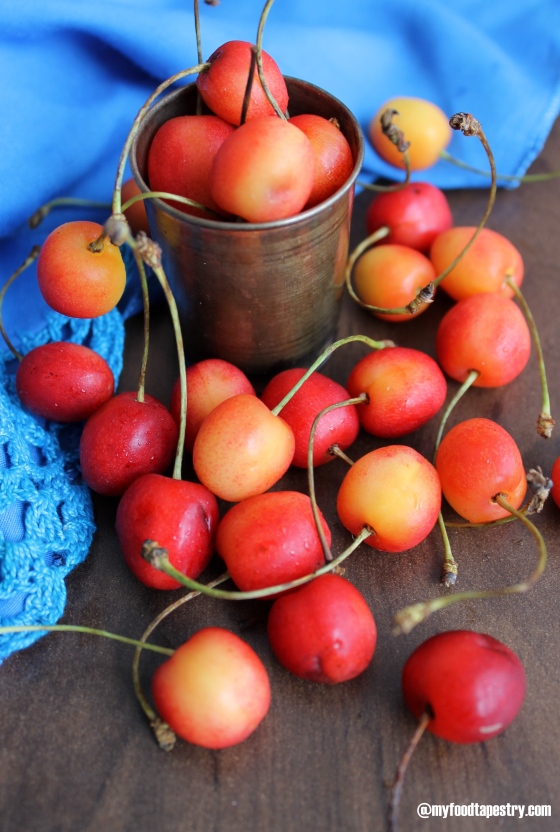 Those cherries had not takers. The precious little eyes which gleamed when a box full was spotted turned blind at the mere mention. The tongue was more than appeased with the little stone fruits. They had been gorging on them for over a month now. So, the scorned neglected but juicy red fruit sat all alone waiting to be acknowledged. I grabbed them before they withered and sulked.

The Recipe: To make a small tart or 4 small one-serve cups

Crush the biscuits in a ziplock pouch using a rolling pin. Remove the crushed mix into a large bowl. Drop a tablespoon of melted butter. Using your fingers, mix and mash around till it resembles a fine crumb.
Grease the container in which you want to set the dessert. Press the biscuit butter crumb as tightly and neatly as you can. Refrigerate for about an hour or so.
Meanwhile, save a bit of cream and mix with cornflour. Keep aside. The remaining cream, nutella and chocolate goes into a pan. Heat till it melts, stir all the while.
Pour the cream and cornflour mix into it. Keep stirring till the sauce thickens to a batter like texture. Cool for about 30 minutes or so.

Now, remove the biscuit base, dot with pitted and halved cherries. Pour the cooled chocolate-nutella-cream mix. Chill for at least 3/4 hours or until set.

Serve with more cherries or stewed cherries like I did.

The biscuit base lends a delicious crunch!

Boil 1 cup of pitted and halved cherries, along with 2 tbsp sugar, juice of 1/2 a lime and 1 cup water. Simmer till the cherries have wilted into a mushy consistency. Keep adding water all along if they stick to the base or incase they tend to burn. Cool and use as required. 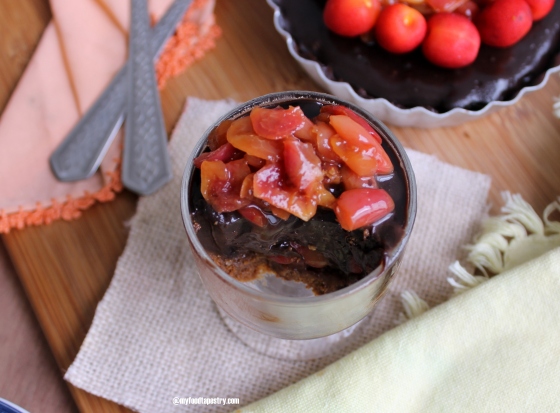 Note: The original recipe has a baked base, I opted for a no bake one. To follow the original, click here.

Note: This recipe will go great with peaches, strawberries, blueberries or even mango.

Note: You can use standard white chocolate instead of the dark one.

I am taking dessert this time over at Angie’s Friday Fiesta #24. Do peek over to see some awesome collection of mouth-watering recipes and writing.